The Blackhawks opened up the season with four games against Eastern Conference competition, all in six days, playing the first two at home.  The first eight games the Blackhawks played were against teams who had made the playoffs the season before, including the defending champions and the defending runner-ups. Their season-opener was to be against the two-time defending champion Pittsburgh Penguins.  Then, the ‘Hawks would see a familiar face in Artemi Panarin when they faced the Blue Jackets.  They would face the Maple Leafs and the Canadiens up in Canada.  They would then go on to finally play against Western Conference teams, playing against the Wild, the Predators, the Blues, and the Oilers.  Today, however, we will just be looking at the first game, when the Blackhawks hosted Pittsburgh on October 5.

It didn’t take long for the Blackhawks’ to strike against Pittsburgh and boy, did they strike fast.

It is worth mentioning that the Pens came right off of a 5-4 overtime loss to the St. Louis Blues the night before and had to travel to Chicago less than 24 hours prior.  Antti Niemi, who was signed by Pittsburgh to backup Matt Murray after Marc-Andre Fleury left in the expansion draft, was in-goal to start the game.  These facts do not explain, however, the beat-down the Blackhawks put on Pittsburgh.

Ryan Hartman led off the scoring just six minutes and 21 seconds into the game after Patrick Kane made a nifty pass behind-the-back pass from behind the net, fooling Niemi and finding Hartman wide-open at the doorstep.  The play developed as Michal Kempny was able to keep the puck in the zone and get it to Kane, who was still in the corner behind the goal line.  Kane then moved to Niemi’s left, attracting defenseman Kris Letang to follow him behind the net.  After Letang moved toward the puck carrier behind the net, Hartman was left wide open at the mouth of the goal.  Sidney Crosby can be seen trying to get to Kane, even after he released the puck, while Brian Dumoulin was caught napping in the middle of the zone.  Niemi had no chance and the ‘Hawks took an early 1-0 lead.

Less than a minute later, Brandon Saad scored on a 2-on-1, with an assist from Richard Panik.  This play was a prime example of good defense leading to the best offense.  Upon a sloppy entry into the zone, Conor Sheary was body-checked by Saad. Running out of room along the boards, Sheary made a behind-the-back pass to Crosby, who again tried to make a behind-the-back pass to Justin Schultz, but Schultz slipped and couldn’t play the puck.  This allowed Saad to get the loose puck on the left wing side and start an odd-man-rush from beyond center ice with Panik, who was on the right wing.  About halfway between entering the zone and the top of the faceoff circles was when Saad made a width-long pass to Panik, who drifted to the top of the right-wing faceoff circle.  He was right on the faceoff dot when he released the puck on net.  Niemi made the right pad save with ease, but the rebound went right off of Saad’s right skate in the crease, and the ‘Hawks led 2-0.  It was Saad’s first point after returning to the ‘Hawks via an offseason trade.

Saad celebrates his first goal upon his return to the Windy City just over 7 minutes into the new season.

Not even a minute after that, the Kane-Hartman-Schmaltz line came right back on and scored another goal, the line’s second goal of the night less than eight minutes into the game.  Ryan Hartman made a pass through the neutral zone from the left wing across to Patrick Kane, who was waiting on the right.  Kane brought the puck to the exact location that Panik had just gotten an assist from; it was here that he tallied his second primary assist of the evening.  Kane turned to his backhand, making another no-look pass on a spin-o-rama that went cross-crease through the Penguins’ defense that found Nick Schmaltz, scoring the seventh goal of his young career.  Ryan Hartman, who picked up the secondary assist, crashed the net.  With Hartman going to the front, he was able to bring Matt Hunwick with him, leaving Schmaltz open across the way.  It was now 3-0 Chicago, scoring the three goals in just 1 minute and 13 seconds.

Brandon Saad netted his second goal of the season not long after his first, only 9 minutes and 16 seconds into the season.  The ‘Hawks worked around the perimeter on this goal, starting with Jonathan Toews passing it from the left corner along the boards to Duncan Keith at the left point.  Keith passed it along the blue line to Brent Seabrook, who then put a quick snapshot on net, intended for a deflection.  Panik crashed the net, and although he didn’t create a screen or a deflection, he caused Niemi to play the puck awkwardly.  Niemi created a huge rebound into the middle of the ice, pushing it into open ice, with Saad being right there.  The lefthanded Saad went from his forehand to his backhand, then back to his forehand to avoid a stick check by Jake Guentzel, putting it past Niemi to make it 4-0.

Niemi was pulled after this goal for Matt Murray.  His start lasted only 9 minutes and 16 seconds.  He gave up 4 goals on 13 shots, giving him a save percentage of .692.

The fifth and final goal of the first period by Chicago was also a case of good defense leading to great offense.  Artem Anisimov blocked a shot that popped into the air.  Alex DeBrincat, who was playing in his first NHL game, tamed the puck and tried to get outlet pass to Patrick Sharp in the neutral zone.  The pass bounced back to Anisimov, who succeeded in getting the pass off and out into the neutral zone.  Sharp was able to win in the foot race after the puck bounced off the boards.  He shot the puck just inside the right faceoff dot, scoring on Murray’s blocker side.  This was Sharp’s first goal in his return to Chicago, as well as DeBrincat’s first point in the NHL.

So that was just the first period of the 2017-18 campaign.  At this point, the Blackhawks were on pace to score 1230 regular season goals (obviously insane, but an interesting stat to look at).

The Penguins had a brief 5-on-3 two-man advantage toward the beginning of the second frame.  Evgeni Malkin was centered in the top of the slot when he passed it down low to Crosby, who was positioned just to the left of Crawford.  His one-time pass when right past Seabrook to Phil Kessel, who shot the puck into the wide-open net. 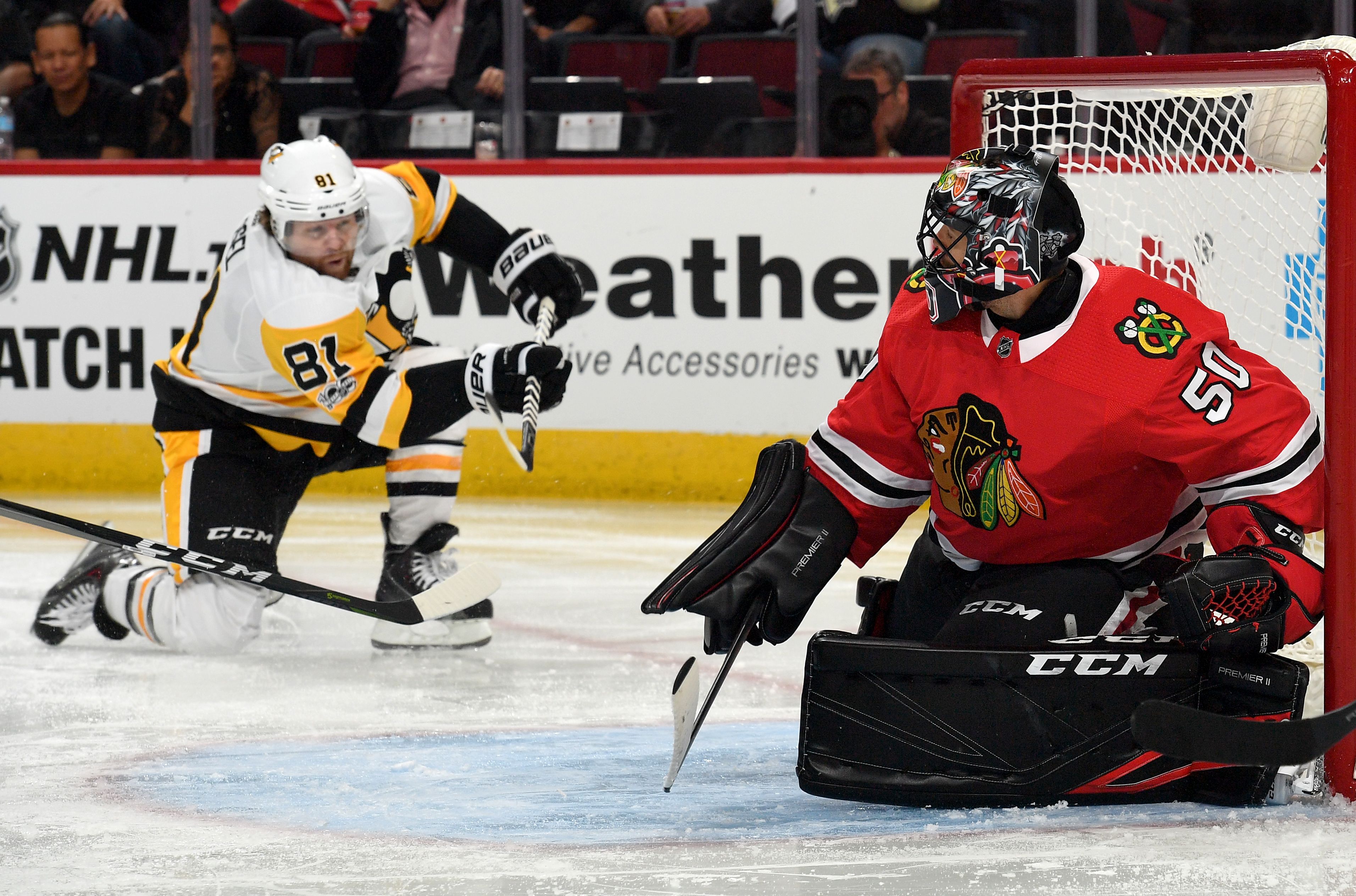 That would be the only strike for the Penguins, though.

About a minute and a half later, Kane scored to put the ‘Hawks back up by five.  Gustav Forsling blocked a shot that went to Kane in the right corner of the defensive zone. He found Ryan Hartman on the blue line on the left side with a lot of space.  He then passed it back to Kane, who at this point was almost was in between center ice and the offensive zone.  He drove to the net on his backhand and flicked it over Murray and into the top of the net on Murray’s glove side.

Richard Panik joined the party midway through the period, and Schmaltz tallied his second of the game before the period ended.  After two, it was 8-1 Chicago.

In the third period, Brent Seabrook blocked a shot that led to another odd-man rush Brandon Saad, this time with Jonathan Toews.  Toews carried the puck from the defensive blue line all the way to below the right faceoff circle, passing it to Saad, who was crashing the net again.  It was a hat-trick in his return to Chicago, as the ‘Hawks took a 9-1 lead.

Brandon Saad scores a hat-trick against Pittsburgh in his return to the Blackhawks.  He slid into the net right after scoring his third goal, giving Chicago a 9-1 advantage.

Brent Seabrook scored another goal to add insult to injury, giving the Blackhawks a 10-1 lead.  They would win by that score.

The Blackhawks took advantage of a tired Penguins squad, winning 10-1 on opening night in front of a bunch of Happy Humans.  Brandon Saad scored a hat trick, while Sharp scored a goal in his return to Chicago.  Alex DeBrincat’s assist was his first NHL point, coming in the first period of his NHL career.  The Hawks started off 1-0-0, with a very memorable game for the Blackhawks and their fans.