The Chicago Blackhawks had high hopes entering the 2017-18 season; they hade brought back Brandon Saad in a trade after shipping him off to Columbus just two offseasons earlier.  He was to be reunited with center Jonathan Toews, who had been struggling since Saad left his side.  Patrick Sharp was returning after playing two seasons in Dallas, signing a cheap contract to take a veteran leadership and depth role in the Windy City.

Artemi Panarin and Brandon Saad were the main parts of a blockbuster trade on June 23, 2017.

The Hawks had finished the previous regular season with the most points in the Western Conference.  Although they got swept by last-seeded Nashville, they still looked strong heading into the next season. 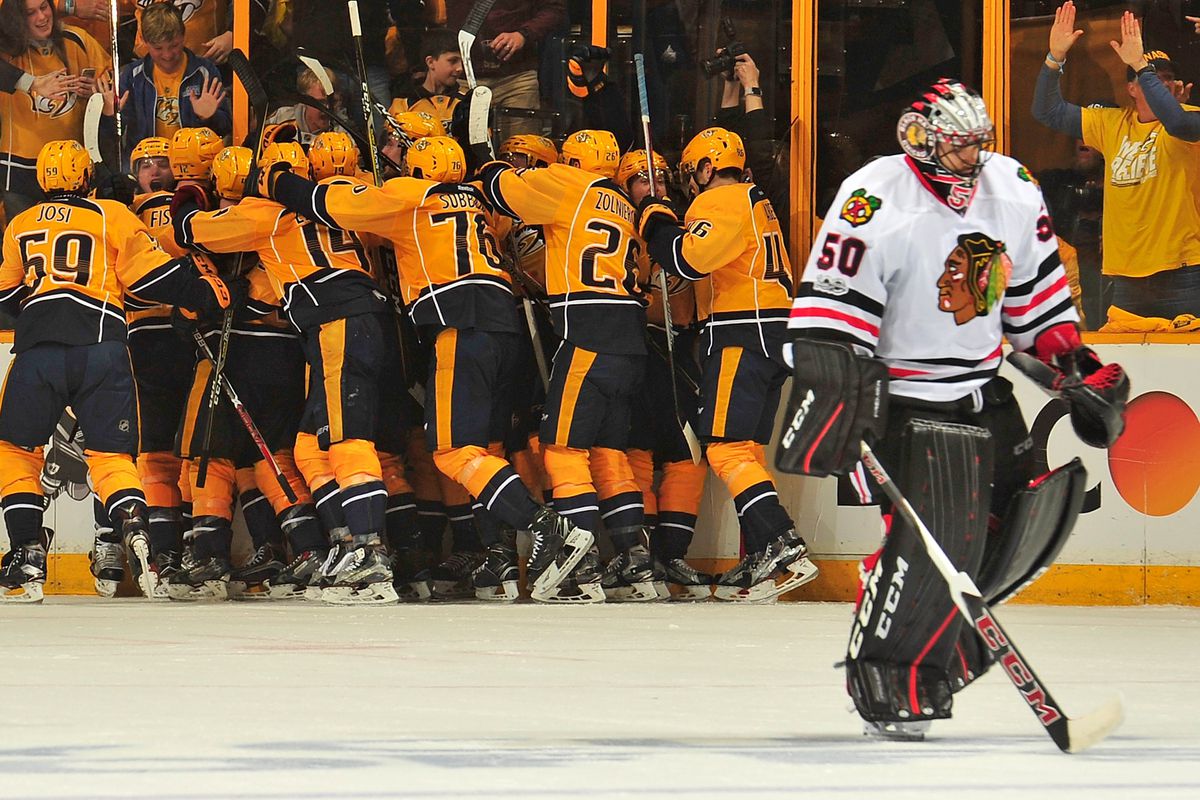 Predators celebrate a Game 3 overtime win at home against the Blackhawks in the first round of the 2017 Stanley Cup Playoffs.

There were a few changes, however.  The biggest was when Marian Hossa was put on LTIR for a persisting rash that was caused by his equipment.  TVR was drafted by the Vegas Golden Knights in the expansion draft, and Kruger was traded to the aforementioned Golden Knights.  Scott Darling was traded to the Carolina Hurricanes for a third-round pick after putting up a .923 save percentage across three seasons in the Windy City.  Lastly, Niklas Hjalmarsson was traded to Arizona to free up cap space to reacquire Saad, as well as to get younger at the defensive position.  Hjalmarsson was one of the few ‘Hawks of value that did not have a no-move clause. All of the aforementioned players won at least one Stanley Cup with the Blackhawks. Scott Darling with the Carolina Hurricanes.

The ‘Hawks signed and resigned a ton of free agents for cheap throughout late April until early July.  To go along with Sharp, goalies Jean-Francois Berube and Anton Forsberg, forwards Tommy Wingels, Lance Bouma, and David Kampf, and defensemen Jordan Oesterle and Jan Rutta all signed with the Blackhawks.  Anton Forsberg was acquired as a part of the Saad-Panarin exchange mentioned earlier, but he wasn’t signed to a contract at the time.  The Blackhawks signed Forsberg to a two-year deal to play as the backup to Corey Crawford.  Lastly, defenseman Darren Raddysh was signed to an AHL deal with the Rockford IceHogs.

Chicago also resigned a handful of players for cheap.  Forwards Tomas Jurco and Richard Panik were the only ‘Hawks forwards to be resigned, with Panik signing a two-year deal worth an annual average of $2.8 million a season.  Defensemen Michal Kempny and Ville Pokka also returned to the organization for a season. Richard Panik posing with three pucks after scoring a hat-trick at the beginning of the 2016-17 season against Nashville.

The 2017 NHL Entry Draft was hosted by the Blackhawks at the United Center.  Here, the ‘Hawks made a couple of trades and ended up with nine draft picks, four being in the first three rounds.  In the draft, the Blackhawks selected defenseman Henri Jokiharju of Finland with the 29th overall pick.  They originally had the 26th overall pick but decided to trade three spots back to also acquire the 70th overall selection from the Dallas Stars.  Their second selection of the draft came in the second round at 57th overall when they selected another defenseman, Ian Mitchell, who was set to go play for the University of Denver. In the third round at 70th overall, the Blackhawks decided to select Russian Andrei Altybarmakyan (say that five times fast) at the right wing position.  The Blackhawks used their 90th overall pick to draft to draft Evan Barratt, a two-way forward, who would attend Penn State to play college hockey.  For the rest of the draft, the ‘Hawks selected forward Tim Soderlund and defenseman Roope Laavainen in the fourth round, forward Parker Foo and defenseman Jakub Galvas in the fifth round, with forward Josh Ess being the Blackhawks’ last pick at 215th overall in the seventh round. 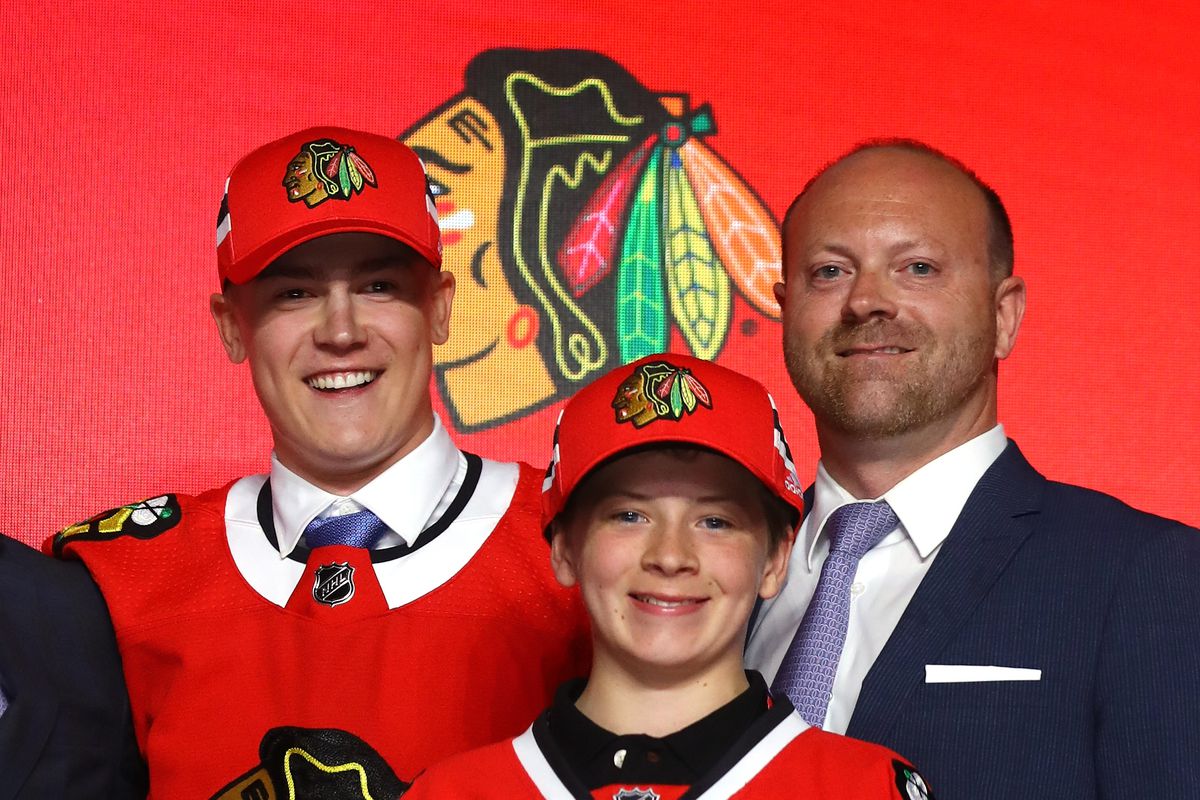 Not a lot of money was spent in free agency in the offseason by the Blackhawks.  The one big acquisition in terms of cap hit was when Brandon Saad was reacquired on June 23rd.  However, the Blackhawks traded Niklas Hjalmarsson away that same day, pretty much evening out the salary cap after the blockbuster Saad-Panarin deal.  Besides Richard Panik receiving nearly $3 million, not much else occurred in the offseason for the Blackhawks.  Chicago didn’t make too many major moves to add on to the team, including the lack of making a splash in free agency, mostly due to some exorbitant contracts that were already on the Blackhawks’ salary cap.